Chinese copper demand has been so strong in the past few months that top producer Codelco has almost sold out of supplies for next year, well ahead of schedule, according to the chairman of the Chilean state-owned company.
“It’s extremely strong, not only China. It’s extremely strong around the world,” Juan Benavides, who took over as chairman of Codelco in May, said in an interview in London. The wave of buying comes as prices have fallen 15 percent this year amid fears that a trade war between the U.S. and China could stifle global growth.
“The trade war is not good at all,” but “demand is strong, inventories are low, supply is not growing as much as demand,” he said. He sees prices rising above $3 per pound ($6,612 a ton) as demand outpaces supply. Futures are trading at about $6,218 a ton on the London Metal Exchange Tuesday.
Mining companies and investors are increasingly bullish on copper because of limited supply and falling global stockpiles. Codelco has locked in copper-cathode supply contracts with European buyers at a premium of $98 a metric ton over benchmark prices, the highest since 2015. Premiums for contracts signed this year with clients in China and the U.S. are also up by 15 to 17 percent. 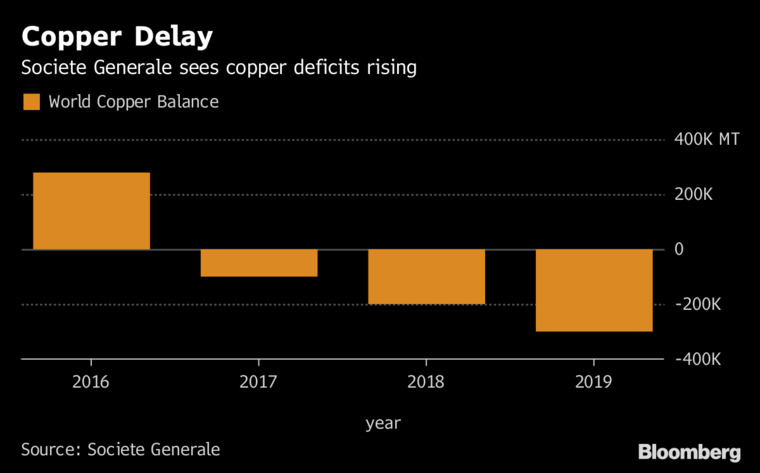 This year’s sales are “amazingly good,” said Codelco Vice President Roberto Ecclefield. “It’s the first time you see China, the U.S., and the Europeans very strong. And that is unique in many years.”
In June, Chief Executive Officer Nelson Pizarro announced that the company would bring forward negotiations for supply contracts, which traditionally start in the October-November period. The miner is “almost done” with its annual sales campaign, and is expecting to finish in the next few weeks, Ecclefield said.
“We have heard from our colleagues. In some places they’re saying: look, there’s no copper in the market now for filling all the requirements,” Benavides said. “We see inventories very low.”
Not Enough
Codelco plans to keep its annual output at 1.7 million tons of copper a year, Benavides said. But as its giant century-old operations age and ore grades decline, it needs to invest billions in so-called structural projects to upgrade mines and avoid a decline in production.
The company has a slate of investments planned for the next seven years totaling almost $40 billion, Benavides said.
But he added that the miner would seek to scale back some of its non-essential investments, and could trim $500 million and $1 billion per year from those spending plans. It has set capital expenditure limit of $4 billion a year, he said.
“More or less 60 percent of the projects are structural projects and the other ones are upgrading machinery, sustainability — those are the things we will review,” Benavides said. “Structural projects are not under discussion.”
Higher copper prices and rising demand mean Codelco can self-fund a larger share of its ambitious spending plans, but it’s still not enough, Benavides said. The company will probably issue a new bond of up to $1 billion next year, he said.
President Sebastian Pinera’s government approved a $1 billion financing package through February. After that, Codelco will need to negotiate additional funding with a government that is implementing an austerity plan across all agencies and publicly owned companies in an effort to save $1.2 billion a year over the next four years.
Source: Bloomberg
Yaang Pipe Industry Co., Limited (www.yaang.com)