Steel stocks a steal of a deal?

America’s largest steelmaker got a boost on
Monday after the stock was upgraded to a “buy” by Deutsche Bank. The company
recently gave strong guidance and shares are up a whopping 22 percent over the
last five trading sessions. 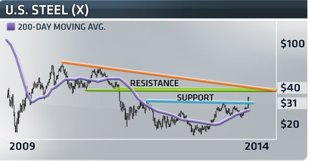 However, Ari Wald,
head of technical analysis at Oppenheimer & Co., doesn’t think investors
should rush to buy more shares just yet based on the stock’s technicals.

“For new longs, we’re suggesting clients to
wait for some consolidation to buy it,” Waldsaid. “But the clients that we got in earlier in
the year, we’re telling them to stick with it. We see more upside
here.”

Wald notes U.S. Steel was put on his
company’s “buy” list earlier this year. “We like that it was pulling back to a
rising 200-day moving average,” he said.

The breakout above resistance at $31 per share on Wednesday was a sign
of meaningful strength in the stock. “There’s more upside here,” he said. “The
stock can get to $40. We would be looking to sell it up there.”

But in the near term, U.S. Steel is due for some consolidation, Wald
said. “We would be looking to buy it on a pullback.”

David Seaburg, head of sales trading at Cowen and Company, agrees with
Wald that there will be a pullback in U.S. Steel’s stock price. “The stock had a
big move up after earnings,” he said, noting U.S. Steel had a sizeable short
interest. “It’s at high levels. I think you see about a 10 percent pullback and
then you get back involved.”

Seaburg said that his company also upgraded U.S. Steel back in
December. “The long-term story here is pretty much
intact,” he said. “They’ve got a massive, massive program in place to cut costs.
They’ve saved about $465 million year-to-date.”

There has already been
consolidation, but
it’s been in the industry itself. “Some of the foreign layers have sold some of
their assets to some of the domestic guys,” Seaburgsaid. “And the macro environment for these names
is getting stronger. I think the economy picks up and I think the pricings
stability here is going to help them long term.”

Cowen and Company has a U.S. Steel is a $42
price target, $2 higher than Deutsche Bank’s recent
upgrade. But
Seaburg believes share prices will fall first before moving up again. “You
probably see a little bit of a pullback here,” he said. “You buy it on a dip –
down 5 – 10 percent – and look for a long-term run higher.”

From Metal & Oil & Gas News, post Steel stocks a steal of a deal?