Don't Miss
Home / Metals / Made of steel: how family forged future in construction 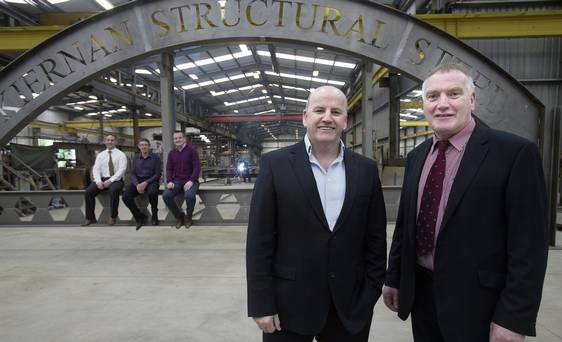 Made of steel: how family forged future in construction

ALMOST 25 years ago the world fell in on Frank Kiernan and his wife Dolores when both were made redundant.

Frank had worked in the steel erection business and Dolores in accounting and book-keeping. When their efforts of finding alternative employment failed, the couple were left facing a bleak future.

Like many during that period, they considered emigrating to England or America in search of work but, with four young children under the age of eight, they felt that leaving Ireland was not an option.

Instead, and with no more than a few pounds and a handful of tools to their name, they embarked on a journey to set up their own business. And so, in 1989, Kiernan Structural Steel, was born.

Today, as they get ready to mark their 25th year in business, they have much to celebrate. What started out as a way to create jobs for themselves and provide for their family has now grown into a hugely successful business that employs 110 staff and has an annual turnover of €13m.

It’s early morning when I arrive to meet Frank and Dolores at their production facility just outside Longford town. Even after 25 years, they have not lost any of their enthusiasm for the business.

Outside, steel beams are being lifted on to large articulated trucks for delivery to building sites throughout the country. There, they will be used to make up the frames for the roofs, floors and walls of major construction projects.

Once inside, we visit the saw and drill lines where large industrial machines cut the raw steel beams into their required lengths in a largely automated process.

“These steel lengths are being used to make trusses for the roof of a customer’s new food factory,” explains Frank. “It’s vitally important that each piece is cut at the exact angle to create the required pitch,” he insists, showing me how the ends must bolt neatly together.

But before that, the newly cut lengths of steel must first make their way to the drilling area where large drilling machines bore their way through the heavy metal to create the required bolt holes.

From here, they move directly to the shot blasting area where they are machine- cleaned and polished. The beams are heavy, weighing many tonnes each. To make their movement around the factory easier, they are laid out side by side on large metal trolley structures and moved mechanically to and from each work station by way of large gantry cranes. There is an almost robotic rhythm to the workflow in the place.

Next, it’s on to the welding area where men wearing protective face guards can just about be seen through the steady stream of blue and white flashes that light up the entire factory as their welding torches connect with the bare steel.

Once welded together, these steel trusses are spray-painted and quality checked before being moved to the loading bays for onward delivery.

“Our steel and cladding products are used in the construction of everything from pharmaceutical plants and food processing factories to office blocks, schools, hospitals and sports stadiums and bridges,” explains Frank.

“We have worked on projects for many top Irish and international firms, such as tech giants Google and Intel; pharmaceutical companies such as Elan, Abbott, Baxter and Merck Sharpe and Dohme; food firms such as Diageo, Kerry and Glanbia and leading retail brands such as Tesco, Dunnes, Musgraves, Lidl, Aldi and Pallas,” he adds.

Frank is originally from Longford, while Dolores grew up about 10 miles away in Co Leitrim. Frank had over 20 years’ experience in structural steel before starting the business.

He served his time initially as an apprentice welder with Steel Fabricators in Longford town before going on to work as a foreman with Dublin firm, JMSE. Here he got the opportunity to work on large projects such as Moneypoint and Shannonbridge power stations. Dolores, on the other hand, had worked for many years in the accounts departments of firms such as ICI in Dublin and GEM Construction in Longford.

“We had very humble beginnings” admits Frank modestly. “We started the business in an old, two-bay hayshed at the rear of our home.

“Our first few jobs were making small sheds for local farmers,” he recalls.

The couple got up early every morning. Their first job of the day was to draw out whatever particular shed was to be made that day. They did this using chalk on the tarmac yard at the back of their house. Later in the morning, around 8am, the pair would be joined by a team of local helpers.

Things were slow in the beginning until, in the early 90s, the company received a welcome boost when the Government introduced grants for farmers wanting to build new sheds. To cope with the increased demand, the couple built a new premises and hired their first employees.

With extra capacity, a broader skill base and the experience gained from working on smaller projects, they began to target the wider construction sector, winning business from local building firms as well as from local factories such as C&D Foods in Edgeworthstown and Hanley’s in nearby Rooskey.

Frank and Dolores remember the early days as tough going. “Getting access to bank finance was a real challenge and so we had to rely heavily on good credit terms from our material suppliers to get jobs done. We had to make the profit from one job to fund the cost of the next,” explains Frank. In 1996, the couple bought their first automated sawing and drilling CNC machines.

At a cost of over IR£300,000 each, it was a huge investment. However, it proved a wise move by dramatically increasing their productivity and enabling them to undertake even larger projects.

“Soon afterwards, we landed a job with Elan pharmaceuticals in Athlone, which propelled us to an even higher level than before,” adds Frank.

However, like all those involved in servicing the construction sector, the downturn in 2007 had a profound effect on the company’s fortunes and turnover fell from €13m that year to €3.5m by 2010. “It was a tough time for us. Margins on whatever projects we did have were largely cut to the bone. As a result, we were forced to greatly reduce staff numbers, while the remaining staff had to take pay cuts to help us survive,” admits Frank.

Work with customers such as Irish Cement in Drogheda together with work on St Mel’s Cathedral in Longford, which was burnt down in a fire on Christmas night in 2010, helped pull them through.

There was, however, one positive twist for Frank and Dolores during that period which caused them to turn their attention towards the export market for the first time. With the help of Irish builders and developers based in London, they were able to secure their first contracts in the UK. Shortly afterwards they got the opportunity to complete a project for Primark in Hannover Germany with Sisks.

In 2012, they went on to win two major contracts; one with Diageo for the new Guinness Brewhouse at St James’s Gate and the other for a new power station at Great Island in Co Wexford. This heralded a return to better times and a steady flow of projects followed, including the Intel Plant in Leixlip, a new distribution hub for Pallas Foods in Ashbourne and the new Global Technology Innovation Centre for Kerry Foods in Naas.

The couple have since been joined in the business by their sons John, a structural engineer who looks after quality control, and Frank Jnr, who works as a contract manager, overseeing the on-site element of the business.

“Our staff are highly skilled. Most are local and many have been working with us for up to 20 years,” says Frank. “While we are a family-owned and family-run company, everyone has a real say in how the company is run,” he insists.

Frank hasn’t lost sight of the help they received along the way from customers, suppliers and neighbours.

But what about future plans?

“We are focused on growing our market share here in Ireland and continuing to expand our foothold in the export market and in the UK construction sector in particular,” says Frank.

The story of Kiernan Structural Steel is a real example of how one couple managed to turn what could have been a bleak future into a hugely successful one through their own hard work and drive.

As we leave the factory, Frank points to an aerial photograph on the wall in the reception. It is of the old hayshed where the business first began. Next to it is another aerial photograph. This one is of the factory and yard as it is today. Now, covering an area of more than six acres, it serves as a powerful reminder of just how far this hard working couple have come.

From Metal & Oil & Gas News, post Made of steel: how family forged future in construction

how family forged future in construction Made of steel 2014-06-02
www.nctv.net

Tagged with: how family forged future in construction Made of steel