Is the rally in steel stocks justified?

Does the stock market expect a rally in global steel prices? The share prices of India’s top steel makers such as Tata Steel, JSW Steel, Steel Authority of India (SAIL) and Jindal Steel & Power have rallied by a little more than 50 per cent from their lows in February and have doubled from their 52-week lows in July 2013.  The only way this rally can be justified is if there is a corresponding rally in steel in the international commodity market.
In the past, a rally in domestic steel stocks has preceded an uptick in the spot price of hot-rolled coils (HRC) in key consuming markets such as Western Europe and China. The correlation has not started working this year as yet. The spot prices for HRC in Western Europe have been stable at around $600 a tonne for two years; in the Chinese domestic market, HRC is $550 a tonne. 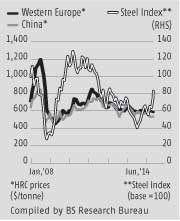 If the current stability in HRC prices is an indication of consolidation, it is a matter of time before these start rallying. The monetary conditions also favour a rally in commodities, such as the one currently on in global equity markets. The Liborinterest rate on a 12-month loan in the dollar has fallen to an all-time low of 0.534 per cent in the London Interbank market. This was around  two per cent in 2009 and 1.96 per cent in January 2002, the latter being when the great boom in commodity prices started; it ended in July 2008. In the run-up to meltdown in the Thomson Reuters CRB commodity index that tracks all major commonly traded commodities, dollar Libor rates had spiked to as high as five per cent in late 2007 and early 2008. Higher commodity prices are essential to the profitability of steel makers, given their high fixed cost of production and operational difficulty in the raising of output in the short term in response to higher prices. This is especially true for integrated steel producers such as Tata Steel and SAIL, whose input costa are not directly linked to the commodity cycle as they have their own iron ore and coal mines.

Conversely, if a rally in steel doesn’t materialise for reasons such as inadequate global demand, it would be tough to sustain the current rally in stocks. Steel production and demand is down 30 per cent in the European Union since 2007 and China, the world’s largest steel producer and consumer, has become a net exporter from being an importer earlier.

Tata Steel has rallied nearly 60 per cent since February and is now valued at 15 times its consolidated net profit and 1.4 times its net worth in FY14. At its peak in March 2008, the stock was 4.1 times its earnings and 1.8x its net worth in FY08. Obviously, the company is no more a value buy unless it reports a spurt in earnings or greatly improves its balance sheet ratios in the next one year.

From Metal & Oil & Gas News, post Is the rally in steel stocks justified?