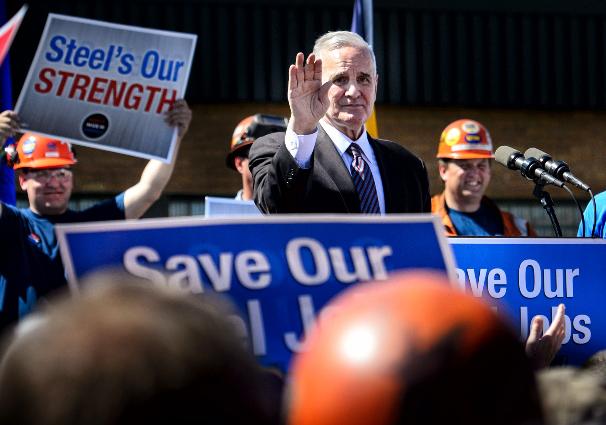 The U.S. Commerce Department said Friday that it has evidence that South Korea and eight other countries illegally dumped underpriced steel drills and other tubular steel products into the United States.

The steel imports, which sold at prices that were 30 to 40 percent below cost, are largely seen as a threat to U.S. iron and steel producers that make raw or final products that are ultimately used by oil drilling and fracking operators in North Dakota and other U.S. states. U.S. steel producers lost $1.2 billion last year, largely because of unfair competition abroad, the industry argues.

Friday’s Commerce decision came after weeks of protests and lobbying in the Iron Range, on Capitol Hill and across the country. The Commerce decision now allows a formal complaint to move forward to a Tuesday hearing by the International Trade Commission.

Thousands of taconite workers and factory owners from Minnesota, the United Steelworkers and the Alliance for American Manufacturing rallied last month in the Iron Range and five other states. Taconite or iron ore is the raw material used to make steel.

The fear was that illegal steel imports could crush the fragile U.S. iron and steel industry, which employs 583,000 workers and had been enjoying a comeback after the recession. But in recent months iron and steel factories started laying off workers because they could no longer compete with imports priced below cost.

U.S. Steel Corp. — which owns KeeTac in Keewatin and MinnTac in Mountain Iron, Minn. — filed a formal complaint with the U.S. government. Commerce ruled that South Korea and several other importers had indeed cheated.

U.S. Steel CEO Mario Longhi said in a statement that he was “pleased with … and applauds the U.S. Department of Commerce’s final decision … [It] shows that the dumping of Oil Country Tubular Goods [OCTG] transpired through unfair methods and market distorting pricing which caused material harm to the American market. As a result of rising imports, U.S. Steel has suffered mightily, orders have been reduced, mills have been idled and jobs have been lost.”

Gov. Mark Dayton attended a rally in Virginia, Minn., last month and told the crowd that he would “stand with you” in the fight against illegal steel dumping and job theft. In a statement Friday, he called the Commerce decision “a huge victory for Minnesota steelworkers.”

Scott Paul, president of the Alliance for American Manufacturing, said that it remains to be seen how the International Trade Commission will respond to the Commerce ruling. The ITC will be involved in determining what, if any, sanctions will be deployed against alleged trade violators.