Iron ore prices could be heading back to $US100 a tonne, in the short term at least, according to the Commonwealth Bank.

Iron ore has rallied almost 40 per cent since November.

Another tailings dam disaster in Brazil, and its threat to global supply, has driven the price up $12 a tonne since last month.

The dam collapsed on January 25, killing at least 100 people, with another 260 missing, presumed dead.

It is a far greater loss of life than the 2015 Samarco disaster in Brazil, where a dam at a Vale-BHP joint venture ruptured, killing 19 people and pouring 60 million cubic metres of toxic sludge downstream.

Iron ore is currently trading about $US87 a tonne on the spot market, its highest price in almost a year.

The price rise has put a rocket under the big miners, with Rio Tinto and BHP gaining 14 per cent and 8 per cent respectively since the start of the year, while Fortescue was up more than 40 per cent.

CBA commodities analyst Vivek Dhar said the recent surge was consistent with the market sidelining up to 40 million tonnes of production from the Brazilian giant, Vale, owner of the mine at Feijao where the dam collapsed.

A decision by the Brazilian courts to shut down an additional 30 million tonne per annum (Mtpa) capacity while additional safety checks are undertaken at another Vale mine could see prices jump again.

“Iron ore prices already suggest that we are at a very steep part of the cost curve, Mr Dhar said.

“An additional supply disruption of around 30Mtpa could see iron ore prices spike above US$100/tonne.”

That would be the highest price since to boom times in early 2014.

However, Mr Dhar said it was unlikely the price spike would last more than a few weeks, as Vale was likely to be able to overturn the court ruling to shut down production at its nearby Brucutu mine.

A slowing Chinese economy is also likely to keep a lid on things.

“China’s steel mills don’t have the margins to pay for elevated iron ore prices for too long,” Mr Dhar said.

Recent data shows Chinese manufacturing activity is contracting and property market cooling, which is likely to flow through to the demand for raw materials.

“We see iron ore prices eventually receding to $US77/tonne by the third quarter as Vale manages to bring back around 20Mtpa of lost production from other operations,” Mr Dhar said.

“By early next year, we think Vale will be able to bring back nearly all of its lost production from other operations, helping bring prices back to pre-disaster levels.”

“While the trend of falling growth in steel demand should continue in 2019, we expect it to exceed the market’s expectations,” Mr Hynes said.

Steel production held up reasonably well last year, with output up by more than 7 per cent over the year on solid demand in the housing sector.

ANZ’s Chinese economists forecasted property investment was expected to stabilise at about 10 per cent growth this year, supported by another spurt of monetary and fiscal stimulus and a rise in property lending.

“We are also expecting some infrastructure related stimulus measures to boost steel demand in that sector,” Mr Hynes said.

“China’s state planner has approved around 1.18 trillion yuan ($US173 billion) of investment in infrastructure projects since October.

“And we expect this [infrastructure] rebound to continue in early 2019 as authorities take a more proactive stance on fiscal policy.”

Mr Hynes said India’s expected transition to a being a net importer of iron ore will also help support prices. 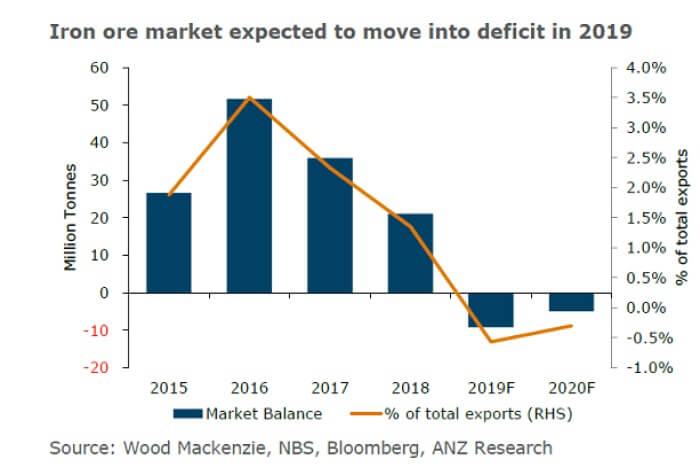 “China’s imports of iron ore are likely to return growth in 2019, on the back of falling domestic production and a shift to use of higher grade iron ore,” Mr Hynes said.

“Together with the changes to our forecasts of Chinese demand and Indian imports, we now see the market moving into a 10 million tonnes deficit this year.”

This compares with ANZ’s previous forecast of a small surplus of 15 million tonnes and has encouraged the bank to raise its short-term price forecasts for iron ore.

“We now see spot prices breaching $US80 per tonne in the first quarter, with further upside likely if the losses in Brazil are greater than expected,” Mr Hynes said.

Even at pre-disaster prices just below $US80/tonne, it would good news for miners and the Federal Government alike.

On UBS figures, a $US10/tonne change in the iron ore price impacts Rio Tinto’s cash flow by $1.9 billion a year and BHP’s by $1.6 billion.

It should also deliver a windfall for the federal budget which was framed on an iron ore price at $US55/tonne.

From Metal & Oil & Gas News, post Iron ore prices are surging and some analysts are tipping it will hit levels not seen since 2014