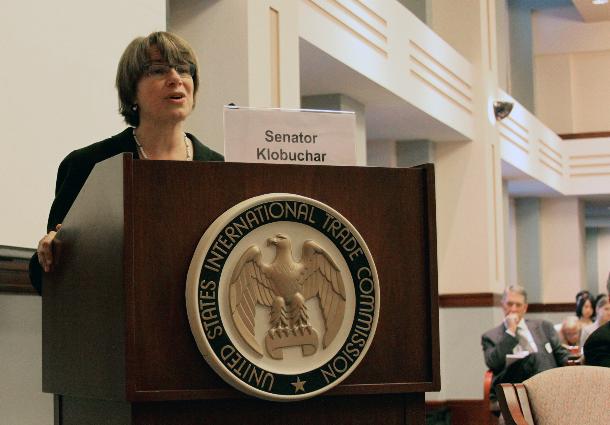 Fed up with the flood of underpriced foreign steel, the nation’s steel executives, steelworkers and politicians unloaded on the U.S. International Trade Commission on Tuesday, urging it to punish countries for illegal dumping tactics.

Their testimony came after Friday’s decision by the U.S. Department of Commerce that said South Korea and eight other nations were guilty of either exporting steel to the United States that was below cost or of accepting large subsidies from their governments. Both practices threaten U.S. steel companies and already have caused financial losses and layoffs in the industry, steel executives told the commission in Washington, D.C.

“Our employees have suffered as a result of this surge of unfairly traded products,” U.S. Steel CEO Mario Longhi told commission members. He noted that United Steelworkers Union members across the nation have felt the sting. The violating nations have inflicted “significant material harm upon our domestic steel industry,” he said.

The steel imports in question are called Oil Country Tubular Goods (OCTG) and are a specialty tubular steel that is in high demand in the U.S. oil and fracking industry. The Commerce Department found that many of these imports were priced anywhere from 6 percent to 36 percent below cost, depending on the nation.

While South Korea was the United States’ largest importer of illegal steel at $812 million, the Commerce Department said other trade-violating nations include India at $175 million, Vietnam at $110 million, Turkey at $107 million, Ukraine at $87 million, Taiwan at $79 million, Saudi Arabia at $71 million, the Philippines at $55 million and Thailand at $37 million.

Armed with this information, the commission will now decide how much, if any, each nation will pay in anti-dumping fines. It will begin issuing its final determinations about the various countries on Aug. 25. In the meantime, it is gathering information about the harm suffered by U.S. iron and steel firms and workers.

The controversy has been brewing for some time. Rallies and protests have erupted across the country and more than 160 members of Congress have called for action from the U.S. government.

U.S. Steel, which owns KeeTac and MinnTac on Minnesota’s Iron Range, and seven other steel companies filed complaints months ago about steel dumping nations and called for U.S. sanctions.

Three weeks ago, hundreds of taconite miners and factory workers from the Iron Range rallied in Virginia, Minn., with thousands of steel workers, factory owners, union officials, manufacturers and politicians who urged the government to take action. Steel dumping led the U.S. industry to post $1.2 billion in losses last year and has already caused some steel mills in Pennsylvania and Ohio to lay off workers, protesters complained.

In testifying before the commission Tuesday, U.S. Sen. Amy Klobuchar said she wants it to take action so that jobs would not be lost on Minnesota’s Iron Range, a fragile economic region in the northeastern corner of the state that has been hurt by cheap imports in the past as well as the normal boom-and-bust cycles of the industry.

“Unfortunately, unfair trading practices by foreign companies are compromising our businesses’ ability to compete and putting steelworker jobs in jeopardy. Now that the investigation has fond clear evidence of Korean companies dumping into the U.S., the [commission] needs to impose penalties,” Klobuchar said.

She told commission members that her grandfather used to work 1,500 feet below ground in iron mines. “I don’t think my grandpa … ever thought of dumping practices or South Korean OCTG products coming in. He didn’t think about that. He just wanted to do a fair day’s work for a fair day’s pay. The miners of today deserve that same treatment.”

Minnesota about 2,000 iron ore workers at 10 taconite mines and processing plants, including those controlled by U.S. Steel, Cliffs Natural Resources and ArcelorMittal. The U.S. iron and steel industry employs more than 583,000 Americans.