The contact fatigue strength, bending fatigue strength, core toughness, surface hardness and wear resistance of the gear are the key indexes of the hot gear, which are directly related to the service life of the gear. The performance of raw materials and heat treatment process will significantly affect the bearing capacity of gear parts, so it is particularly important to select materials according to needs and reasonably prepare the process. Generally speaking, the bearing capacity of gear is mainly measured by the surface hardness, core hardness and effective hardened layer depth of gear after heat treatment. In GB/T3480.5-2008, the fatigue strength of gear is combined with the quality grade of material heat treatment, and the fatigue limit is divided into me, MQ and ml and illustrated. In the design of gears, the bearing capacity of gears shall be calculated based on the quality grade and the corresponding fatigue limit curve, taking into account both the use strength and the economy.

The key factors affecting the heat treatment deformation of gears

Hardenability refers to the ability of steel to obtain martensite or the depth of harden layer when it is quenched under certain conditions. It is an inherent attribute of steel and is mainly affected by alloy elements. There are many ways to calculate the hardenability value in work. The practical application of carburizing steel in gear industry
The following formula is recommended. Hardenability calculation formula of carburized steel with carbon content ≤ 0.25%

Hardenability also includes the relationship between cooling conditions and alloy elements, as well as the application in steel design and substitution, design material selection, heat treatment process parameter control, etc. In other words, hardenability is very important for the design and manufacturing process of gears. The experimental data show that the effective case depth of carburized layer with the same depth is very different due to different raw materials, modulus, overall dimension and cooling conditions. Even though the overall dimension, modulus and cooling conditions are very similar or the same, the effective case depth of workpieces can vary by as much as 0.3mm ~ 0.5mm. The reason is the difference in hardenability of carburized layer.
Hardenability is the highest hardness that can be obtained by normal quenching. It mainly depends on the carbon content of martensite. The higher the supersaturation of carbon, the higher the hardenability of steel. Generally, the quenching hardness increases with the increase of carbon content, but when the carbon content is ≥ 0.6% C, the quenching hardness of workpieces almost does not change. The hardness of common carburizing steel after carburizing and quenching is usually about 64hrc, and the surface hardness after low temperature tempering is often about 60HRC, which is the basic reason why the surface hardness of carburizing gear is generally specified as 58hrc ~ 63hrc.

Generally speaking, the deformation of gear heat treatment is caused by the comprehensive action and mutual influence of various factors

In addition to the pre heat treatment and hardenability, the shape, forging, machining and quenching specifications of the parts may cause deformation of the parts, thus affecting the accuracy and life of the gears. For the gear parts, the variable shape points are nothing but the tooth direction of the tooth shape, the accumulation of the circumferential pitch, the shrinkage of the internal spline, etc. the deformation rule can be judged by experience. The machining allowance or compensation amount shall be reserved in advance according to the process route, so that the finished parts are in the acceptable deformation range.

Design and control of effective hardened layer depth of gear

In the design and production of automobile gearbox gear, effective hardening layer depth design is generally two methods. That is to say, according to the general range of gear module, apply the standard or calculate according to the empirical formula t = α * m (M module), α = 0.20-0.30, seldom analyze its applicability from the mechanical point of view. It is very important to design the best effective hardened layer depth for improving the tooth surface strength and saving energy.
The spalling failure of gears is not only related to the distribution of shear stress under the tooth surface, but also to the effective hardening depth, hardness gradient and other factors. The effective hardened layer depth of gear is often difficult to cover the transition area, and the peeling off of all kinds of hard tooth surface gear is often related to the transition area. The practice shows that the biggest characteristic of the effective hardened layer deep peeling off is that the fatigue crack occurs in the transition area between the hardened layer and the center, and the peeling pit formed is deep and large. In general, increasing the effective hardening depth is beneficial to improve the bearing capacity of gear and prevent fatigue peeling failure. However, too large hardening depth will make the process more difficult, process cycle increase, distortion increase and many other problems, resulting in the increase of gear production cost and energy consumption. The reasonable design of effective hardened layer depth is to ensure that the transition zone has enough strength to prevent deep peeling, and not over design.
The effective case depth of the case hardened gear is closely related to the strength, reliability and other properties of the gear, which is the key to ensure the full play of the bearing capacity of the gear. In the process of gear meshing, the local surface pressure stress is called contact stress, also called Hertz stress. The bearing capacity of tooth surface is related to Hertz contact stress. According to the formula, the magnitude of contact stress depends on the external load and the reciprocal of equivalent curvature radius of tooth surface. When the maximum contact stress is the same, the larger the equivalent radius of curvature is, the larger the effective depth of hardening layer is.

Other optimum design of gearbox gear

In a word, the design and manufacture of gear is one of the key factors to improve the performance of gearbox. In the design, attention should be paid to the selection of gear material and process mode, the uniformity of structure, the design of effective hardened layer depth, etc.; technologists should pay attention to the elimination of adverse factors in the process of pre heat treatment, machining and heat treatment, and work together to improve product quality.
Source: China Pipe Fittings Manufacturer – Yaang Pipe Industry Co., Limited (www.yaang.com)

Previous: Sealing principle and characteristics of flat welding flange
Next: The role of titanium in steel

How to choose and install spiral wound gaskets? 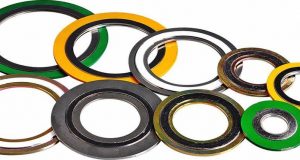 Analysis of the manufacturing process of spiral wound gasket