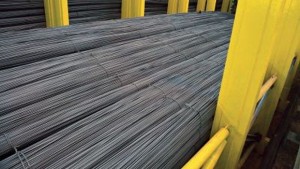 Cairo, Asharq Al-Awsat—Demand for steel in Egypt will remain strong “for the next 10 to 20 years” in spite of a fall in demand after the 2011 revolution, according to Egyptian Steel chairman Ahmed Abou Hashema.

Egypt’s steel producers—who rely on imported raw steel billets to produce reinforced steel bars (rebars) for the construction industry—have been buffeted by the falling pound. But now Abou Hashema believes the industry’s output of rebars, which make up the bulk of the country’s steel sales, will give it a competitive advantage in the post-revolutionary years.

“There is a housing shortage estimated at 7.5 million housing units. There is also a need to construct 45,000 schools, not to mention the need to develop Egypt’s infrastructure in general,” he said.

But with the steel industry being highly energy-intensive, he cautioned against any further infrastructure investment until energy sources could be secured: “We should by no means build factories worth billions of dollars when we don’t know where the energy necessary for their operation will come from,” he said.

Observers expect the widely anticipated government of Abdel-Fattah El-Sisi to reduce or even end energy subsidies, a burden to state coffers but long of great benefit to factory owners.

Petroleum Minister Sherif Ismail told reporters in early May that the interim government was already considering raising energy prices for high-volume consumers such as steel mills.

It was reported earlier this week that Egypt’s steel factories are frequently shut for up to a third of the day due to energy shortages, and to Abou Hashema this is a key indicator that it is reform, not subsidies, that will help his company maximize profits.

“Just like any energy-intensive industry, the steel industry has been affected by the lack of energy because of power outages and shortages of natural gas,” he said, but added: “We have overcome some of these obstacles by relying on the latest technology in the steel industry whereby we consume less energy.”‪‬

Egyptian Steel was founded in 2010 under the guidance of Abou Hashema, and since the 2011 revolution has made a number of significant capital investments, including the construction of two new factories that would nearly double the company’s production capacity by 2015. One of the two planned factories, at Beni Suef, would be the largest steel facility in the Middle East and North Africa region when it opens.