The swearing in of Narendra Modi as the 15th prime minister of India on 26 May 2014 brought a renewed sense of enthusiasm and vigor to the nation, against the promise of “ache din” – good days – in the future.

Five years on, as the world’s largest election is underway in the country, feelings about the current political situation are complicated, but what is certain is that the world will be watching carefully for the outcome of the vote.

Government policies have provoked fierce debate in the country, with critics – termed “compulsive contrarians” by the government – questioning the calculation of GDP, the adverse impact of de-monetisation on trade, a ham-fisted approach to the implementation of a goods and services tax, and agrarian distress as well as the veracity of employment figures.

However, the government’s initiatives towards building a world-class infrastructure, introducing debt resolution through bankruptcy law, easing rules of doing business and weeding out big ticket corruption in government dealings – among others – are also difficult to deny. It’s for this reason that the Indian steel industry, whose prospects hinge on an infrastructure and construction push in the country, hopes for a second term for Prime Minister Modi.

India will consume more and more steel, and this expected growth has generated massive interest from global steel companies and hedge funds in ferocious bidding for debt-ridden domestic steel companies. In 2018, India replaced Japan as the world’s second-largest steel producing nation, with its steel demand expected to grow at 7.1% in 2019 according to Indian Steel Association.

Companies like ArcelorMittal and Nippon Steel & Sumitomo Metals have been waiting for years to gain quick entry into this lucrative, high consumption zone. Through a joint venture, the companies have finally been able make a dent, acquiring Essar Steel under its debt resolution process.

But it was evident that doing business in India – especially setting up a greenfield steel plant – was not going to be a walk in the park. POSCO’s story is a case in point.

In 2005, POSCO India signed a memorandum of understanding with the government of Odisha, a state in eastern India with large reserves of high quality iron ore, to set up a 12 million mt per annum integrated steel plant with a proposal of committing $12 billion. It was billed as the single largest foreign direct investment into the country at the time, but known to be marred by resistance from local population.

The land earmarked for the company was eventually withdrawn in 2017, after it remained unused for several years. In its defense, POSCO alleged that a plant could not be set up unless a captive iron ore grant was assured – allowing only the company to extract iron ore from the mine. The land was then allocated to Indian steel major JSW in 2018, which proposed a plan to set up a mega green-field plant on the same plot.

As India’s attractiveness to international steel companies has grown, so has the determination within the country to protect this core industry.

Since the start of the current administration, the Ministry of Steel has been working closely with Indian firms to help develop the country’s own globally-competitive steel enterprises. The industry, in turn, has actively tried to sensitize the government to distortions in international trade, and educate stakeholders about structural inefficiencies within the country, which make it difficult to compete with other mature steel-producing economies.

Remedial trade policies like the minimum import price, anti-dumping duties and safeguard duties helped lift the profitability of the domestic industry, after it was adversely affected by changing global trade dynamics during 2015-16. Platts’ data also shows that most primary mills in India have reduced exposure to international markets in their business plans and continue to have a “domestic market first” strategy. India’s Ministry of Steel has supported this view, seeing it as an opportunity to bolster the “Make in India” mission of PM Modi. The Ministry of Steel’s Twitter page says: “Make in steel for make in India”.

Although there was no major surge in imports last year, the mills aim to protect themselves against what they see as unfair imports. Mills continue to advocate strongly against concessional tariffs under free trade agreements (FTAs) with Korea, Japan, ASEAN and APTA, as well as the possibility of a Regional Comprehensive Economic Partnership (RCEP) between 16 nations. Indian mill sources point out that India supported Japan and Korea in exporting their large surplus steel at concessional duty rates, at a time when global steel markets witnessed a slowdown across most the geographies. But Indian mills have not been able to export to these countries and the FTAs remain one-sided.

Last year brought a turnaround in the fortunes of Indian mills, with the Indian steel market becoming more and more inward looking. Both imports into and exports out of the country fell, for the major part of the year. However, for the April 2018 to March 2019 period, data from the country’s Joint Plant Committee showed that India’s imports stood at 7.84 million mt while exports were at 6.36 million mt, up 4.7% and down 33.9%, respectively.

Indian mill sources also point out that the sheer size of the Chinese steel industry gives the country enormous power to define prices of raw materials for steelmaking. Every time raw material prices go up due to Chinese actions, the cost of steel production goes up globally, making them uncompetitive vis-à-vis China. For instance, China’s reduced production of graphite electrodes – a key component for electric arc furnaces (EAFs) that turn scrap into steel – in 2018 led to an acute shortage globally and a surge in prices. Sources also question the Chinese strategy of announcing capacity cuts, while continuing to add newer capacity and increasing production.

The scenario going forward will be interesting to watch as global prices of steel have begun to tumble, shrinking the spread between Indian delivered prices and Chinese FOB export prices. During December 2018 when international prices fell drastically, Indian mills were concerned that reference prices used to determine anti-dumping duties would become meaningless. This has led the mills to advocate a sort of indexation mechanism to make these reference prices dynamic and not frozen for a period of five years, during which time anti-dumping duties remain in place as per Indian laws. The mills also wish to do away with the concept of a “lesser duty rule” in anti-dumping investigations, wherein authorities impose duties at a level lower than the margin of dumping but adequate to remove injury. 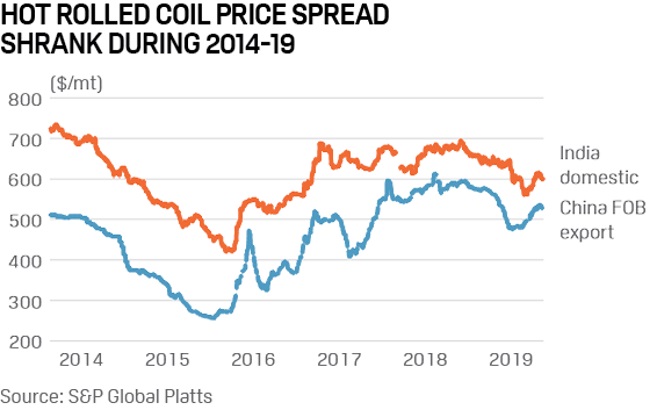 Given the positive business sentiment around infrastructure growth – current and expected – steel companies in India are hopeful of decades of continued growth in demand for their products. Additionally, the rate of urbanization in India is low – 66.8% of the population still resides in rural areas – fueling further optimism about steel consumption in India.

Domestic mills will want to cater to this rising demand by themselves and thwart imports of steel products that could be manufactured within the country. That is reason enough for Indian steel market participants to hope that Modi returns to power in 2019. A hung parliament may bring uncertainty into the market, and could be seen as a setback for the domestic industry, which would have to restart its advocacy efforts from scratch. As for the global steel industry, opportunities to grab a slice of India’s large and growing market also hang in the balance.
Source: Platts

2019-04-25
www.nctv.net
Previous: Selection criteria for materials used in non-standard flanges
Next: Determination of the center position of the connection between the flange and the pipe