Don't Miss
Home / Metals / Copper Supply Woes on Show With World No. 2 Mine Output to Halve

Copper Supply Woes on Show With World No. 2 Mine Output to Halve

A battle over the world’s second-largest copper mine has dogged Freeport-McMoRan Inc. shareholders for more than a year. Now it may be the turn of the copper market.

Production at the massive Grasberg pits in Indonesia will more than halve next year as it transitions to new underground operations, cutting some 300,000 metric tons of supply from a market many already believe is headed for deficit.

The drop in projected production, revealed by Freeport’s guidance, highlights the supply-side challenges facing copper. While prices have slid more than 15 percent since early June on fears of a global trade war, many investors, traders and mining executives remain bullish about the long-term prospects.

“The problems facing copper supply are meaningful, widespread and generally underestimated,” said David Lilley, managing director of Drakewood Capital Management. “It seems like wherever you look there are challenges be they political, labor unrest, under-investment, ore-grade depletion or some combination of them all.”

The output drop at Grasberg has been a long time coming.

The mine, which sits at high altitude amid the tallest mountain range in Indonesia’s remote Papua province, is one of the world’s richest mineral deposits, pumping out billions of dollars’ worth of copper and gold over the past 30 years.

Freeport has long been anticipating the end of open-pit mining at Grasberg, and is hoping two new underground mines, both located below existing mines, will return output to previous levels within a few years. But technical challenges have slowed the ramp-up of Deep MLZ, while the Grasberg Block Cave won’t even start producing copper until 2019, meaning total production at the Indonesian mine will be “significantly lower” in 2019 and 2020, Freeport said July 25. 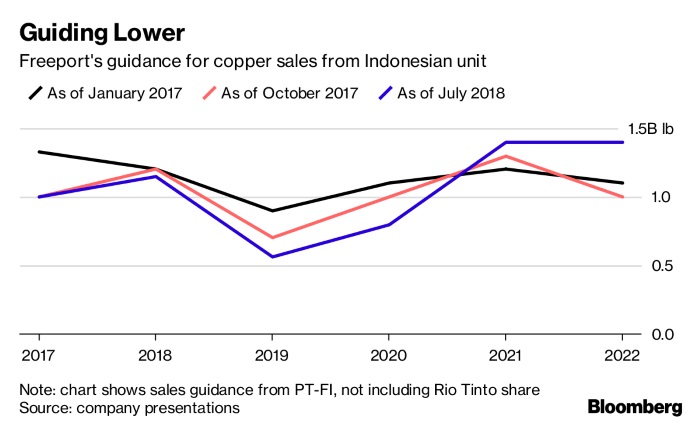 The Deep MLZ mine lies 1,800 meters (5,900 feet) below the surface, under the DOZ block cave mine that is expected to stop producing sometime after 2021. Last year, mining at DMLZ triggered “seismic activity” that slowed its ramp-up.

Freeport now plans to use hydraulic fracking — a technique made famous by the U.S. shale oil industry — to relieve rock stresses and prepare the mine for large-scale production.

The Grasberg Block Cave lies below the open pit. In 2017, Freeport threatened to halt development amid tense negotiations with the Indonesian government over ownership and a labor dispute. Although work continued, first production was pushed from 2018 to the first half of 2019 by a decision to extend the life of the open pit by six months.

“This is going to be the biggest block cave in the world,” said Richard Bourke, an analyst at Bloomberg Intelligence. “And if you look at their history on meeting guidance, they don’t have a really good track record.”

Freeport opted to extend the open pit to mitigate the drop in overall production, Adkerson said last month. Changes to the Deep MLZ mine plan are the main reason production is falling but won’t have a material impact over five years, spokesman Eric Kinneberg said by email. Freeport expects Grasberg to produce about 5.7 billion pounds (2.6 million tons) between 2018 and 2022, Kinneberg said. Under current arrangements, 5.3 billion pounds of that would go to its Indonesian subsidiary, PT-FI, and 400 million pounds to Rio Tinto.

While Kinneberg declined to provide total annual production guidance for the Grasberg mine, based on previously published details of the split between PT-FI and Rio, those numbers imply that output at Grasberg will fall from 1.25 billion pounds this year to 560 million pounds, or about 250,000 tons, next year, according to Jefferies analyst Christopher LaFemina. 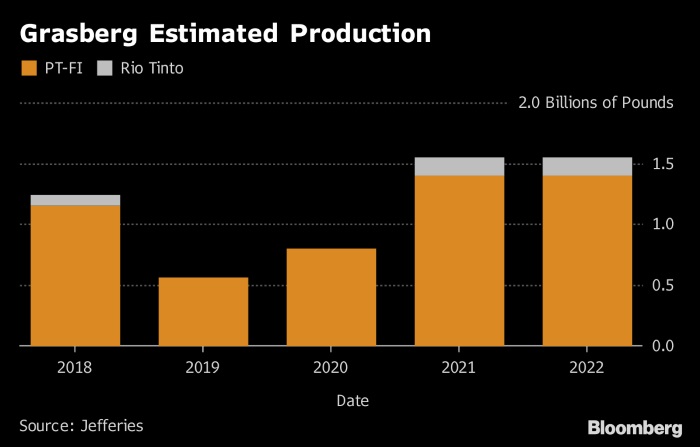 That’s a drop equivalent to about 1.5 percent of annual mine production of copper. It’s enough to offset the planned growth in supply from First Quantum Minerals Ltd.’s Cobre Panama project, the biggest new source of copper due to hit the market next year.

“The two biggest copper mines in the world this year will produce less copper next year,” LaFemina said, referring to BHP Billiton Ltd.’s Escondida mine in Chile, and Grasberg.

“It adds the narrative that the problems that we’re starting to see on the supply side are things that will help boost copper prices,” said Bourke. “On a supply side, fundamentals are very supportive of higher prices going forward.”

From Metal & Oil & Gas News, post Copper Supply Woes on Show With World No. 2 Mine Output to Halve