Heat exchangers (also known as heat exchange equipment) are widely used heat exchange equipment in the petroleum industry. They can be used not only as heaters and coolers, but also as important production equipment for some chemical products. First, it plays an important role in production. In petrochemical equipment, heat exchangers account for about 40% of the total quality of refinery process equipment, accounting for about 20% of the investment cost of the construction plant.
In view of the increasing proportion of domestic heavy oil processing, the corrosive environment in the refinery production equipment service is deteriorating, and the corrosion problem is becoming more and more serious and complicated, which leads to the unprecedented severe test of the safe operation of refinery heat exchanger equipment. Accidents in the leakage of heat exchangers are also common. For example, the second circulating water field of the refinery of Liaoyang Petrochemical Company has leaked 13 water coolers from January to October 2000. The Yanan refinery of Yanchang Group was extended from July 2007. In the three years of June 2010, the refinery carried out four inspections on the maintenance of the refining and chemical plant, and the total number of heat exchangers replaced was 18, and more than 130 core-changing and core-cleaning heat exchangers were used, 80% of which were Heat exchangers have varying degrees of damage. 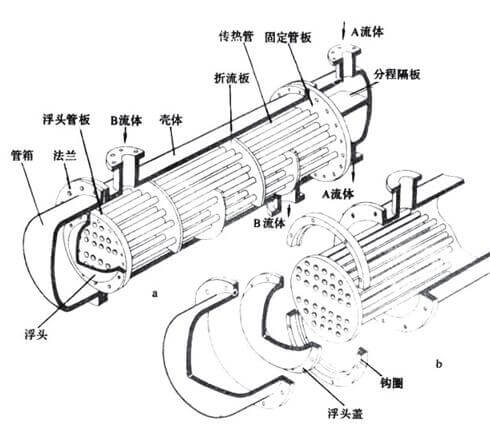 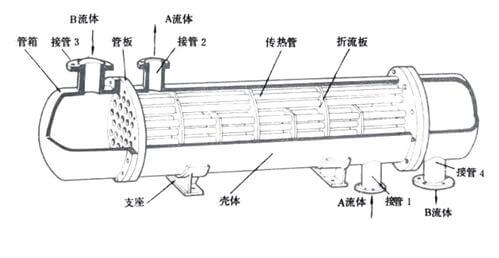 Figure 2 is a structural view of a fixed tube plate heat exchanger, which is characterized in that both end plate plates are fixedly connected with the casing, and the tube bundle and the casing cannot move relative to each other. The heat exchanger has a solid structure, large processing capacity, strong adaptability, and low production cost. However, when the temperature difference between the tube and the casing is large, due to the different degree of expansion, a large thermal stress is generated, and it is difficult to clean, and is suitable for heat exchange of a fluid having a small temperature difference and being difficult to scale. 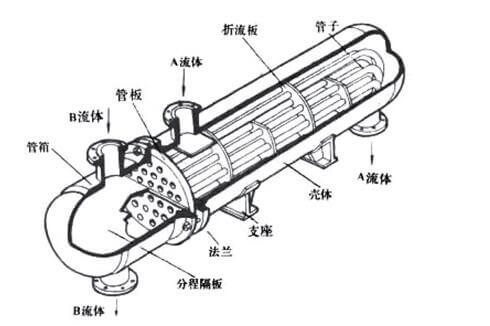 There are many types of heat exchangers in refineries, but they are classified into two categories according to the type of corrosion mechanism: electrochemical corrosion; physical corrosion.

The manifestations of electrochemical corrosion of heat exchangers are mainly: hydrogen evolution corrosion and oxygen absorption corrosion.
(1) Hydrogen evolution corrosion occurring in an acidic medium
In the fluid medium, there is the adhesion of the impurity medium and the non-uniformity of the metal matrix itself, which leads to the formation of tiny electrode potential differences in different parts. Corrosion will occur under the action of local batteries, which will produce different under different media environments. The type of corrosion, such as hydrogen evolution corrosion in acidic aqueous solutions, the metal dissolves in the anode region as ions:
Fe → Fe 2+ +2e (anode)
At the same time, hydrogen is precipitated in the cathode region:
2H + +2e → H 2 (cathode)
Therefore, in the acidic aqueous solution state, corrosive dissolution of the metal is caused. In the presence of chloride ions, the corrosion is more severe. When the metal is in contact with the aqueous solution, the water molecules are adsorbed on the metal surface in a direction, resulting in a layer of oxide, that is, a passivation film on the metal surface. The chloride ions are highly polar and strong. Penetration, can penetrate the passivation film on the metal surface, interact with the metal to form soluble compounds (ferrous chloride, ferric chloride, etc.), and continue to dissolve, the corrosion products and the more concentrated at the bottom of the corrosion point The stronger the effect, the deeper the hole, and eventually the pit erosion. Figures 4 and 5 show the low-temperature H 2 S-HCL-H 2 O corrosion corrosion morphology of a constant top water cooler in a refinery. The shell-side operating medium of the water cooler is a constant-top oil and gas, and the shell/tube bundle material is 16MnR/09Cr2ALMoRE, respectively. The inlet and outlet operating temperatures are respectively 60°C-40°C, and the H 2 S-HCL-H 2 is formed due to the condensation of the top gas. After the acid solution of O, a corrosion pit having a depth of 0.5 to 1.5 mm is formed on the outer wall of the tube bundle.
Figure 4 Pitting appearance of the outer wall of the tube bundle 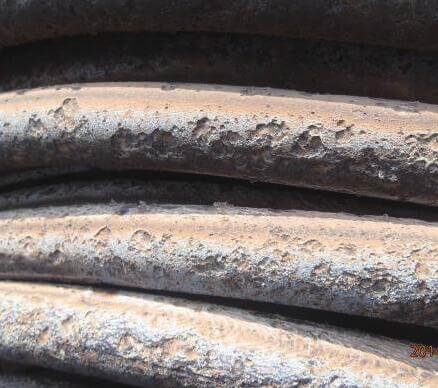 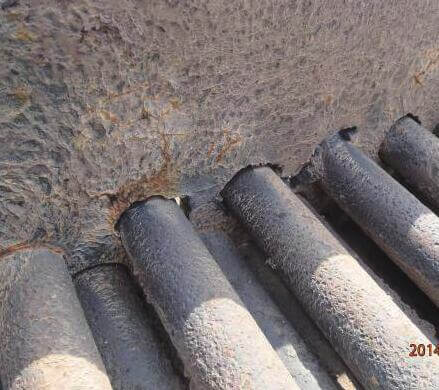 (2) Oxygen absorption reaction occurring in neutral medium or weakly alkaline medium
In a weakly alkaline or neutral aqueous solution, the corrosion of the heat exchanger is oxygen absorption corrosion, and some impurities present in the water are adsorbed on the metal substrate to form iron oxide and hydroxide scale layers, and the scale layer and the metal surface There is a potential difference that produces an electrochemical reaction that causes corrosion under the metal scale. Since the circulating water is neutral, its response is as follows:
O 2 +H 2 O+4e → 4OH – (cathode)
The dissolution of the base metal under the scale layer:
Fe → Fe 2+ +2e (anode)
The base metal continuously loses electrons to produce Fe 2+ dissolution due to electrochemical corrosion under scale. In addition, the cooling water contains a small amount of bicarbonate such as Mg 2+ or Ca 2+ , which reacts under certain circumstances:
Ca(HCO 3 ) 2 +2OH – → CaCO 3 +2H 2 O+CO 3 2- is converted into carbonate deposits in the scale layer, so that the scale layer is thickened, the internal stress of the scale layer increases, and the scale layer appears. Cracking, shedding and bubbling tendency.
Figure 6. Corrosion profile of the solvent regenerative overhead condenser head. The operating medium of the shell side of the heat exchanger is circulating water, the operating temperature is 33-41 ° C, the operating pressure is 0.4-0.388 MPa, and the material is 16MnR. The inspection results show that during the operation, due to the yellowish brown hard scale in the pipe box, the pits with a depth of 0.2 ~ 0.4mm occur under the scale, as shown in Figures 6 and 7.
Figure 6 Corrosion topography of the pipe box 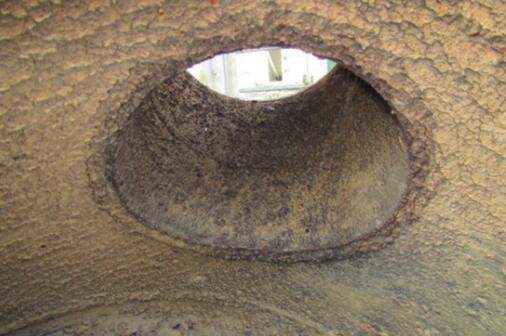 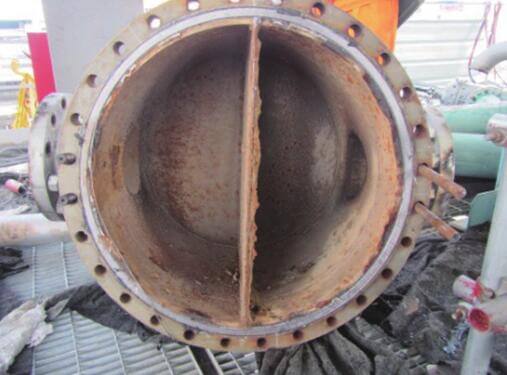 In the refinery production process, the common physical corrosion phenomenon is the erosion and thinning of the metal surface. This phenomenon is a form of destruction in which physical fluids act on the metal surface and accumulate over a long period of time to achieve physical wear. Some devices have large processing capacity, and the shell-side fluid flow rate is fast. Under the impact of high-speed fluid, the vibration of the tube is intensified, the protective film on the metal surface is damaged, and the metal at the damaged portion is further corroded by the medium fluid to accelerate the corrosion rate. The vibration of the tube cooperates with the wear of the medium to cause erosion corrosion. If high flow rates and turbulent liquids also contain bubbles or solid ions, wear and corrosion will be more severe. Figure 8 is a corrosion diagram of the shell inlet of a vertical re-boiler of a refinery extraction tower, and Figure 9 is a partial enlarged view of the inlet cylinder. The tube-path medium is sulfolane and aromatic hydrocarbons, and the shell-side medium is steam, operating temperature. Up to 175 ° C, the pressure is about 0.1Mpa, the inner wall of the shell inlet has a directional groove, and the typical heat exchanger scouring and corroding.
This phenomenon often occurs at the inlet, outlet and baffle of the heat exchanger. The tube is obviously sunken in these parts, the outer diameter of the tube is reduced, the wall is thinned, and the shape of the groove, corrugation, etc. is present. Show directionality.
Figure 8 Reboiler shell entrance erosion corrosion map 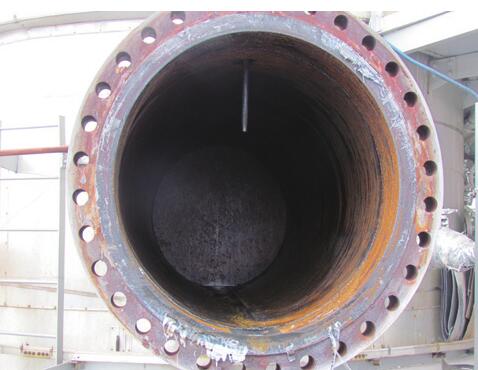 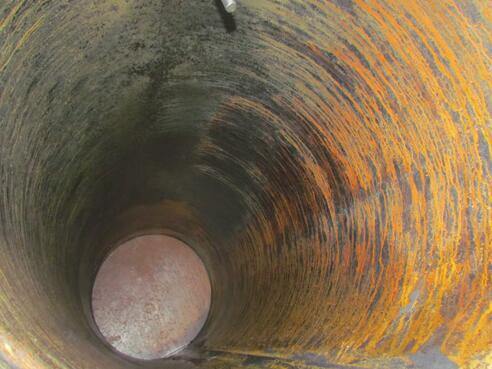