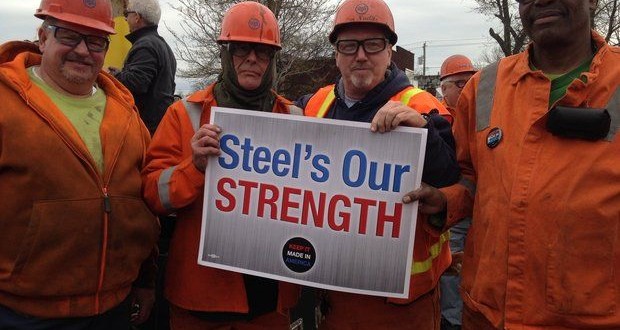 The U.S. Commerce Department announced Friday that duties were being imposed on certain steel imports from South Korea and eight other countries for violating antidumping laws.

In a preliminary determination earlier this year, the department found that South Korean steel producers, and those from the other countries, had not dumped products. Dumping occurs when a foreign company sells a product in the U.S. at less than its fair value.

The American steel industry, unions and manufacturing groups were among those outraged that tariffs hadn’t been imposed. They were joined by U.S. Sen. Sherrod Brown, Democrat of Ohio and U.S. Sen. Rob Portman, Republican of Ohio, in lobbying the Commerce Department to impose duties. After an extensive investigation, which customarily occurs after the preliminary finding, the department decided to impose duties on the foreign manufactures in its final determination.

The United States Steel Corp. was one of about a half-dozen domestic steel manufacturers that petitioned the Commerce Department to impose duties. At issue are Oil Country Tubular Goods, or OCTG, which are primarily used in oil and gas wells, including those in Ohio’s growing energy exploration industry. U. S. Steel’s Lorain Tubular Operations plant makes such products.

Mario Longhi, U.S. Steel’s president and CEO, was pleased that duties would be imposed because he said his company had suffered from foreign products being dumped in the U.S.

“As a result of rising imports, United States Steel has suffered mightily — orders have been reduced, mills have been idled and jobs have been lost,” he said in a news release. “Our only recourse against such actions was with the U.S. Department of Commerce and their ability to support the rule of law and create a level playing field for American manufacturing. We applaud their decision to prevent further gamesmanship of our laws and to secure our nation’s economy.”

The other countries that will receive duties include: the Philippines, Saudi Arabia, Taiwan, Thailand, Turkey and Ukraine. Dumping margins for companies in those countries ranged from a high of 118.32 percent for imports from Thailand to 2.05 percent for a company from India.

The International Trade Commission must still determine whether the domestic steelmakers were injured by foreign companies dumping steel. In the case of South Korea, that determination will be made in September.

The Alliance for American Manufacturing held several rallies across the country lobbying for tariffs, including one in May at U. S. Steel’s Lorain Tubular Operations plant.

“Today is a good day for America’s steelworkers and OCTG producers, and also a good day for the U.S. economy,” said Scott Paul, president of the Washington, D.C.-based group, in a news release. “The outpouring of bipartisan support from Congress and the thousands of workers who took the time to make their voices heard underscored the importance of this decision. We hope the International Trade Commission will come to the same, fact-based conclusion.”

The United Steelworkers union was also pleased duties would be imposed.

“With this decision, the U.S. Commerce Department listened to thousands of hard-working Americans and took a stand for fairness on behalf of those workers and their employers,” said Leo W. Gerard, USW’s international president.

Both Ohio senators were happy to see duties imposed. Brown and Portman had lobbied hard for them, including leading a group of 57 senators, who sent a letter to Commerce Secretary Penny Pritzker seeking duties on South Korea.

“Ohio’s steel tube manufacturers are among the strongest in the world,” said Brown in a news release. “But their ability to compete is undermined when countries violate trade law by subsidizing their producers or when exporters dump their products in the U.S. market. By levying trade tariffs against countries like South Korea, we can protect local jobs and strengthen our economy, creating new jobs along the way.”

“I’m pleased with today’s ruling reaffirming that American manufacturers deserve to compete on a level playing field,” Portman said in a news release. “Ohio pipe and tube companies are among the best in the world, but we must stand up to foreign competitors who break trade rules at the expense of Ohio workers.”