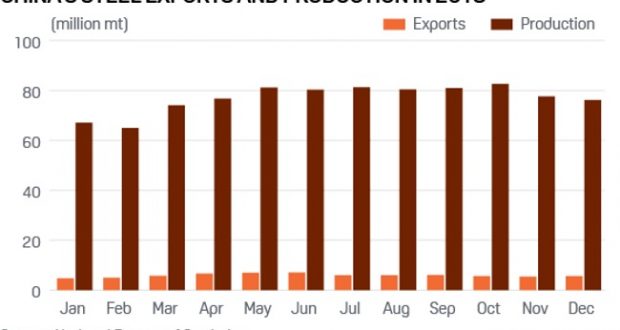 Ahead of the S&P Global Platts Global Metals Awards in London, on May 16, The Barrel presents a special series of articles looking at the global metals trade. Paul Bartholomew and Jing Zhang take an in-depth look at China’s steel production in recent years, and the likely trajectory in 2019.

Just a few years ago, market updates from major iron ore producers Rio Tinto and BHP routinely stated that they expected Chinese crude steel production to reach 1 billion metric tons by the end of the next decade.

This sounded like an incredible amount of steel, particularly as China’s economic growth trajectory was heading south. Further, such a prediction seemed unrealistic given China’s steel output had retreated by 2.3% in 2015 to just under 804 million mt.

For many Chinese government officials and steel analysts, the argument went something like this: steel consumption had peaked in 2014, Beijing was slashing steel capacity under its supply-side reform agenda, and the country was shifting toward a higher-value, consumption-driven economy based on cleaner technologies.

In short, the era of massive industrial capacity build, so-called “ghost cities”, toxic assets, ballooning debt and excess that China was known for, was coming to an end. China had embarked on a new era of sustainable growth, with its “blue skies” anti-pollution policy at the fore. In this setting, surely there was no way steel output would ever reach 1 billion mt?

So it came as a huge surprise that steel output increased by 15% over the past two years. China produced a record 928 million mt of steel in 2018, up 6.6% on the year before, according to the World Steel Association. Most forecasts at the start of the year envisaged output growth of 1%-2%. Perhaps the 1 billion mt mark was not so far-fetched, as it would require less than 1% CAGR over the next 10 years to reach this level. Indeed, China started 2019 at a gallop: February’s steel output of 71 million mt was up 9.2% on the year before. 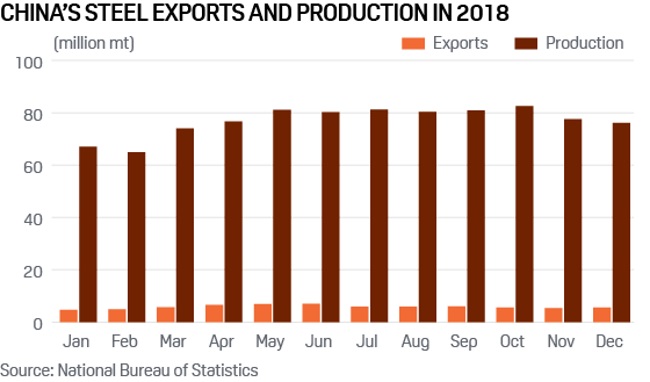 The key concern for the rest of the world is that if China’s economy slows and domestic demand is not strong enough to absorb all of the steel it produces, its exports could destabilize global steel prices as they did over 2014-2016. During this period, China exported more than 100 million mt of steel each year. By the end of 2015, steel and raw materials prices reached a nadir.

In the Midwest region of the United States, domestic hot-rolled coil prices averaged $373/short ton in December 2015, lower even than during the global financial crisis and 40% down on the same month a year earlier. Not surprisingly, many international steel companies were forced to slash production and staff, unable to continue operating at sub-economic prices. Some steel companies never recovered and were subsequently forced to find a buyer. A plethora of antidumping duties have been introduced to protect local steel industries and last year the US applied a 25% import tariff on steel from many countries. But trade protection measures often just shift the supply pressure problem from one place to another: as one door closes, exporters try to open another.

The topic of China’s steel overcapacity has often been brought up at international government meetings, such as the G20. China has long been the US steel industry’s bête noire – despite Chinese steel accounting for less than 2% of US steel imports – and the Section 232 import tariffs on steel and aluminum have proliferated into a wider trade conflict.

China would argue it has been trying hard to reduce its capacity. It closed down around 140 million mt/year of unlicensed induction furnace (small scrap-fed rebar making facilities) capacity in 2017, and completed the removal of 150 million mt/year of legitimate steelmaking capacity over 2016-2018. In principle, companies are only to build new facilities if they remove a similar volume of capacity.

One of the reasons for the high steel production growth in 2018 could be that induction furnace production in 2017 was never included in the official data.

China wants to produce more steel from EAFs as this is considered to be better for the environment. As a result, there appears to be more flexibility and concession around new EAF capacity. Though the commissioning of new facilities is predicated on closures of existing iron and steel making capacity of equivalent or even slightly higher volumes, the numbers indicate there will be a net capacity increase this year.

In 2018, Chinese steel demand was extremely strong. Margins and prices hit six-year highs at times, and finished steel exports fell to a relatively modest 70 million mt. But in the final quarter, the market rapidly deteriorated as China’s efforts to control debt and spending resulted in a tightening of liquidity. China’s GDP slowed to 6.4% in Q4, as Beijing took steps to stimulate the economy. Further, expectations that China would tighten up steel production in winter to curb emissions were priced into the market. But prices eased when these output constraints were loosened in response to the weaker economy.

HRC is the main steel product used in manufacturing, which has been struggling due to weakness in consumer segments, such as automotive, white goods and appliances. Many consumers are highly leveraged to property and have found it harder to borrow money. Last year auto production fell for the first time since the early 1990s. Beijing plans to introduce some measures this year to stimulate demand in those segments, but overall the flat steel market may not grow much on last year.

The outlook for long steel products, such as rebar, is more positive as there is still a solid pipeline of construction work ahead. Property market investment increased by 11.6% year on year to Yuan 1.2 trillion ($0.18 trillion) over January-February, according to the National Bureau of Statistics. Funding for residential property projects accounted for 72% of the total, up 18.0% year on year to Yuan 0.87 trillion. But house prices softened at the start of this year and S&P Global Ratings expects the property sector to contract by 8%-12% in 2019.

China issued Yuan 1.22 trillion ($0.18 trillion) of local government bonds between January and March. Investment in infrastructure construction rose by 4.3% year on year in the first two months of 2019, while investment in rail transport increased by 22.5% year on year.

But incremental demand growth from infrastructure is likely to be mild, while the overall steel demand outlook for the rest of the year is solid at best. In November, the World Steel Association forecast flat demand growth in China this year but acknowledged there would probably be an “upside to our forecast.” More positively, ANZ Bank said in late March that it had revised its forecast for Chinese steel demand growth this year to 4.5% from 3%.

Beijing needs to maintain solid economic growth and job creation without overcooking things and contributing to the debt mountain. The People’s Bank of China has already said there will be no stimulus “flood” this year. There will be a tweak here and there, some fiscal levers pulled when necessary. But all the signs indicate a “steady as it goes” kind of year.

Given the increase in capacity outlined above, the likely level of crude steel production this year, and the muted demand and price outlook, exports look set to rise on last year. Some Chinese steel mills said they expected an increase of 5%-10% on last year’s 70 million mt. While it is unlikely there will be a return to the dark days of several years ago, additional volume into the market will pressure regional steel prices and could bite into steel margins this year.