Chinese copper fabricators and importers are scrambling to divert or resell cargoes of U.S. copper scrap en route to China after Beijing hit such imports with a 25-percent duty as the trade row with Washington deepens, sources said.

U.S. scrap metal, waste paper and plastics cargoes arriving in China from Aug. 23 will incur the new levy after China announced on Wednesday its final list of tariffs on $16 billion of U.S. goods. Scrap was not on a draft list released in June.

In the first quarter there were almost 2,200 cargoes of copper scrap per month sent to China from the United States, according to Reuters’ calculations based on customs data. The average cargo of scrap copper sent to China is about 20 tonnes.

With less than two weeks before the new tariffs come into effect, China’s imposition of duties threatens to disrupt trade for one of the world’s top metal and scrap consumers, as recyclers rush to find new homes for cargoes to avoid paying new duties.

“Last night I lost sleep,” an executive at a metals recycler with processing yards in Zhejiang province said on Thursday. He has several cargoes of U.S. scrap copper due to arrive in Ningbo port after the deadline or about to load on the U.S. East and West coasts.

“We don’t have a solution yet, but we’re discussing it with the supplier,” he said, adding he was looking for buyers in Japan, South Korea, India and even Europe.

Those importers with stranded cargoes will likely have to offer discounts to attract buyers, sources said.

The penalties are China’s latest blow to the U.S. recycling sector, after Beijing hit aluminum scrap with hefty duties in April as part of the trade dispute.

“The impact will be draconian on both U.S. scrap processors and Chinese consumers,” Michael Lion, Hong Kong-based president of Lion Consulting Asia and a Chinese metals industry veteran, said in an email.

Last year, the United States sold almost $6 billion worth of scrap commodities to China and was the second-largest supplier of copper scrap behind Hong Kong, exporting 535,371 tonnes worth roughly $1.8 billion in 2017. Hong Kong sent 627,180 tonnes, according to Chinese customs data. 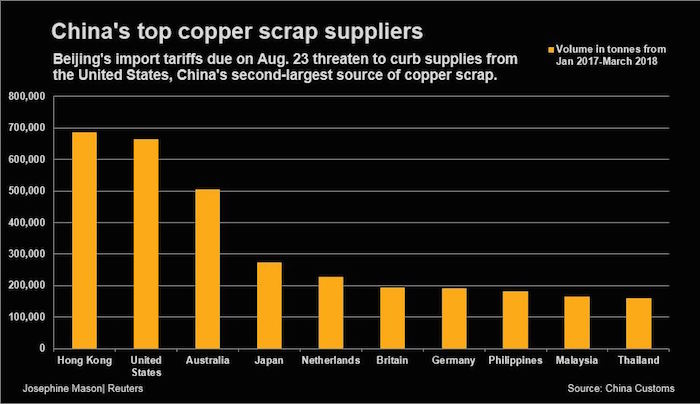 The global recycling sector is also reeling from Beijing’s tighter restrictions on waste imports introduced over the past year as China aims to stop being the dumping ground for the world’s garbage.

China’s scrap metal imports dropped by a third in the first half of 2018 to 2.86 million tonnes, while the country has barely imported waste plastic this year.

An executive with a major scrap metal recycler in Asia said there would likely be a combination of resales, trans-shipments and reluctant payment of the 25-percent tariff.

“Those that can resell may see (that) as the best option even if at lower numbers as there is always risk in trans-shipment,” the source said, adding that there were “many” cargoes already on the water.

An executive at a Zhejiang-based copper rod maker, which uses scrap as raw material, also said shipments via a third-country were an option, although cargoes could even be sent back to the United States after docking in China.

The three executives declined to be identified because they are not authorized to speak to the media.

Responding to the news, the Washington-based Institute of Scrap Recycling Industries (ISRI) warned that China may struggle to find enough material from other countries.

2018-08-12
www.nctv.net
Previous: Trump Trade war – A boon for some European producers
Next: The operating points of passivation treatment for stainless steel pipe