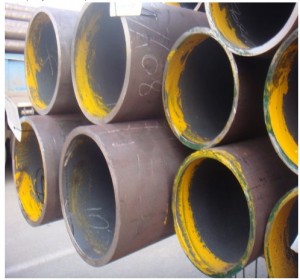 Carbon steel is a metal alloy that is formed as a result of combining iron
and carbon.

The American Iron and Steel Institute (AISI) defines carbon steel as
follows:
Carbon Steel is considered to be carbon steel when no minimum
content is specified or required for chromium, cobalt, columbium [niobium],
molybdenum, nickel, titanium, tungsten, vanadium or zirconium, or any other
element to be added to obtain a desired alloying effect; when the specified
minimum for copper does not exceed 0.40 per cent; or when the maximum content
specified for any of the following elements does not exceed the percentages
noted: manganese 1.65, silicon 0.60, copper 0.60.

Carbon steel is classified as follows

Carbon steel can be classified, according to various deoxidation practices,
as rimmed, capped, semi-killed, or killed steel. Deoxidation practice and the
steelmaking process will have an effect on the properties of the steel. However,
variations in carbon have the greatest effect on mechanical properties, with
increasing carbon content leading to increased hardness and strength. As such,
carbon steels are generally categorized according to their carbon content.
Generally speaking, carbon steels contain up to 2% total alloying elements and
can be subdivided into low-carbon steels, medium-carbon steels, high-carbon
steels, and ultrahigh-carbon steels; each of these designations is discussed
below.

As a group, carbon steels are by far the most frequently used steels. More
than 85% of the steel produced and shipped in the United States is carbon
steel.

Steel is carbon steel when is doesn’t contain Aluminum, Boron, Chromium,
Cobalt, Columbium, Molybdenum, Nickel, Titanium, Tungsten, Vanadium or
Zirconium. Copper does not exceed 0.40% or when the maximum content specified
does not exceed the percentage noted

Carbon steels are different from cast iron as regards the percentage of
carbon. Carbon contains 0.10 to 1.5% carbon whereas cast iron possesses from 1.8
to 4.2% carbon.

Steel typically is considered to be carbon steel when the proportions of
other trace elements in it do not exceed certain percentages. The maximum
percentages typically are 1.65 percent for manganese and 0.6 percent for copper
and silicon. The copper percentage must be at least 0.4 percent. Steel that also
contains higher or specified quantities of other elements, such as nickel,
chromium or vanadium, is called alloy steel.
ASTM A106 Covers seamless carbon
steel nominal wall pipe for high-temperature service, suitable for bending
flanging and similar forming operations.

Manufacturers add carbon to iron to solidify the structures in it and
strengthen the resulting metal. It’s one of the most cost-effective alloying
materials, and altering the amount of carbon changes the properties of the
steel. Carbon steels can be classified as low-carbon steels, medium-carbon
steels, high-carbon steels and ultrahigh-carbon steels.

Steels with very low amounts of carbon, about 0.05 percent to 0.3 percent,
are called low-carbon steels and are similar to iron. They are very ductile,
which makes them hard to machine. They are used to make flat-rolled sheets or
steel strips that are utilized to create ships, wire products, car bodies,
domestic appliances, tin plates and more. Low-carbon steels are cheaper, but
they cannot be altered by heat treatment, which is why they generally are used
for fabrication and paneling purposes.

Carbon steel may also be used in reference to steel which is not stainless
steel; in this use carbon steel may include alloy steels.
As the carbon
content rises, steel has the ability to become harder and stronger through heat
treating, but this also makes it less ductile. Regardless of the heat treatment,
a higher carbon content reduces weldability. In carbon steels, the higher carbon
content lowers the melting point.

Carbon steel is broken down in to four classes based on carbon content:

Mild steel, also called plain-carbon steel, is the most common form of steel
because its price is relatively low while it provides material properties that
are acceptable for many applications. Low carbon steel contains approximately
0.05–0.15% carbon and mild steel contains 0.16–0.29% carbon; making it malleable
and ductile, but it cannot be hardened by heat treatment. Mild steel has a
relatively low tensile strength, but it is cheap and malleable; surface hardness
can be increased through carburizing.
It is often used when large quantities
of steel are needed, for example as structural steel. The density of mild steel
is approximately 7.85 g/cm3 (7850 kg/m3 or 0.284 lb/in3) and the Young’s modulus
is 210 GPa (30,000,000 psi).

Carbon steels which can successfully undergo heat-treatment have a carbon
content in the range of 0.30–1.70% by weight.

Approximately 1.0–2.0% carbon content. Steels that can be tempered to great
hardness.